LED lighting used to be considered for commercial use primarily. But, as the technology has advanced, it has quickly become more popular in residential homes as well. As LEDs continue to gain share of the lighting marketplace over incandescent and fluorescent options, it’s important to know what LED terms mean so you can understand the advantages and select the best LED options for your home.

Let’s Start with the Basics

LED, which stands for “Light Emitting Diode,” is a two-lead semi-conductor light source that, through certain engineering, releases energy in the form of photons. What you need to know is that LEDs use less energy, last much longer, and don’t give off as much heat compared to their incandescent and fluorescent counterparts.

The originally high cost of LED bulbs used to thwart consumers from buying them; but within the last couple of years, consumers have gotten more savvy that although LED bulbs may still cost a bit more than traditional lighting, they’ll save energy and money in the long run.

Like other Line family products, the Line chandelier features a super thin, edge-lit LED panel that provides ambient light. This dramatically proportioned luminaire offers a direct-indirect light distribution which delivers ample light to work surfaces free of shadows while also illuminating the ceiling and upper portion of walls to give the space the sense of immensity. A perfect addition to commercial offices or modern kitchen islands. by dweLED

The second “good to know” basic is that more lighting fixtures are utilizing integrated LEDs. These are LEDs designed into the fixture permanently unlike those with removable LED bulbs. The greatest advantage of integrated LEDs is they allow lighting designers to create a slimmer fixture, enabling very sleek lighting designs. (If you choose this type of light, make sure it has at least a five year warranty.)

How long do LEDs last? LED lighting does not burn out instantly as conventional light sources do; it slowly dims down over time. When shopping for a LED light fixture, you’ll see something like “50,000 hours to L70” or “50,000 hours to 70 percent.” Translation: The LED lighting will last at least 50,000 hours, and by that point will still be running with at least 70 percent of its original output (or a 30 percent reduction of its initial output). This is compared to traditional incandescent’s finite lifetime of 1,000 to 2,000 hours.

Correlated Color Temperature or “CCT.” Many LED lighting fixtures offer a choice of color temperature to differentiate various hues of white. CCT is measured in degrees of Kelvin (K), on a scale of 1,000 to 10,000. The higher the degrees Kelvin, the closer the light’s color output will be to actual sunlight. Warm, amber light is typically 2700 to 3000K, and if you want to go brighter, 3500 to 4000K is a cooler, whiter light. Choose which is more appropriate to the room’s function, the mood you want to set and your taste.

Color Rendering Index or “CRI.” This is the measure of a LED light’s ability to show realistic or natural colors on such things as artwork, furnishings and even fruit that may be in a bowl in your kitchen. On the CRI lighting scale of 0 to 100, LED light sources with a 90+ CRI are considered to be the best at color rendering. So if you want colors to look accurate under LED lighting, go for the higher CRI.

And Then There’s Dimming

If you want to set varying moods in a space, say, in a kitchen where children do their homework (full throttle bright light) and where adults entertain (lower light), LEDs that dim are important. Many LED fixtures don’t dim at all or flicker when the lights are lowered.

Good LED lighting manufacturers will use LEDs that are dimmable and indicate what kind of dimmer should be used—whether it be a type or a brand. Don’t assume that your new LED lighting fixture, downlights or undercabinet LED tape can be paired with any dimmer. (By the way, all of the lighting products shown in this post are dimmable).

To sum up, LEDs use up to 90 percent less energy than traditional incandescent lighting. Because of their energy-efficiency and lower cost to operate in the long run, it’s important to learn LED terminology. With more local municipalities calling for energy savings, one day, LED lighting may be the standard in all households.

The Future is Bright

Rustic Modern A Way of Life, A State of Mind

Tips For Lighting A Dining Room

Back to School Home Lighting 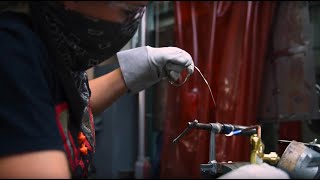